In this section you will find an archive of race reports previously published in WTtransition.

Fancy doing a particular race next year ? Not sure what to expect ?

Take the opportunity to do some research and improve your PB !

Written by Simon Page on 17 June 2014. Posted in Race Reports

The intention for the 2014 season was that Cambridge Olympic Triathlon would be my “A” race but then the City of Cambridge Triathlon was introduced including a swim past my old boat house so I just had to enter that too and having qualified for the European Standard Distance Duathlon Championships in Weyer Austria in August I have ended up with 3 “A” races this year.

Cambridge Olympic distance is a great local race that is very well contested, why is it a great race? Well because they give you a really cool chunky bespoke medal(and let’s be honest that’s the important bit) and a handy long, thin towel great for spinning sessions and free advertising for CTC. Seriously the event is really well run, a great course, the marshals are friendly (except one but more on that later) good competition and it sits on our doorstep.

Craig and Charlie do Pontevedra

Written by Craig Dyce and Charlie Passfield on 13 June 2014. Posted in Race Reports

I’m checking emails in my hotel room the day before the World Duathlon Championships in Pontevedra, Spain and WTtransition Issue 385 comes through. A quick scroll down and my eye is caught by Andy Bryant’s report on his IM Lanzarote adventure. Having read his narrative I’m caught between being humbled by his achievements and concerned about how he found the time to write such a long, thorough and interesting summary?! Well, a couple of days later, I’m waiting for my EasyJet flight back to Stansted and find I have two hours to kill…so for those with a mild interest, here is my report on the Spanish adventure.

The journey started last August when, having qualified to represent GB at the World Duathlon Champs in Ottawa, I managed to secure a Silver medal in my 45-49 age category and therefore automatically pre-qualify for the 2014 event in Spain. A house move meant that the luxury of taking the family out to Spain for a holiday, as we had done in Canada, wasn’t really an option and I was very undecided about whether to take up my place. As it was I left the final decision until mid-March thus ensuring that rather than having spent a winter focusing on training I had precisely 10 weeks to “go for it”. Not really a manageable prospect for an Ironman but for the sprint Duathlon (5k run, 20k bike and 2.5k run) not completely out of the question.

Written by Jeremy Lovell on 06 June 2014. Posted in Race Reports

I set myself a goal last year to step up to half iron man distance. The training regime from January to July was fairly intense and whilst my wife Carol was supportive at first by the time we got to the start line the novelty of me training had begun to wear off!

My problem though was that I hated the swimming. It was the part of triathlon that gave me no pleasure. Until I received some words of wisdom. “Make swimming your friend”, a chum told me, its as simple as that. Those comments combined with the help and support of the WaldenTRI swim coaching team has put me into a different place.

Written by David Peasgood on 31 May 2014. Posted in Race Reports

On Saturday 17th May the first race of the ITU World Paratriathlon 2014 series took place at Yokohama, Japan.

Brothers Jack and George Peasgood both travelled to Japan on Wednesday as part of the GB Paratriathlon Squad. With only a short time to acclimatise to the time difference and the warm humid weather, the boys had the opportunity to look at the course the day before they would be racing on it.

George was racing in the newly formed PT4 category, which includes both below elbow and below knee impaired athletes. With a 0655 start time the 750m wetsuit sea swim was challenging, with high waves. George was second out of the water, in a time of 11:57, heading to transition for a speedy change out of his wetsuit to head off on the 20km bike leg of the race.

The bike course consisted of 4 laps of 5km, with many 90' corners on each lap, requiring good bike skills. George was the fastest Brit in his category on the bike and completed the 20km in 33:04. With another speedy transition, George headed off for the 5km run as the day was warming up. He finished 8th in his category in 1:09:52, with the first four places being awarded to below elbow impaired athletes.

Elder brother Jack, was acting as a guide for visually impaired athlete Dave Ellis, racing in the PT5 category. The duo had an excellent swim, exiting the water first in 14:15. With a speedy transition, the men headed off on their tandem, on the 4 x 5km course, returning to transition first in 30:32. The men had an excellent 5 km run, completing it in 19:13. Their race time of 1:05:42 meant that they were first back for the PT5 category, and a gold medal.

The next race in the ITU Paratriathlon series is in London, at Hyde Park, on 31st May 2014. 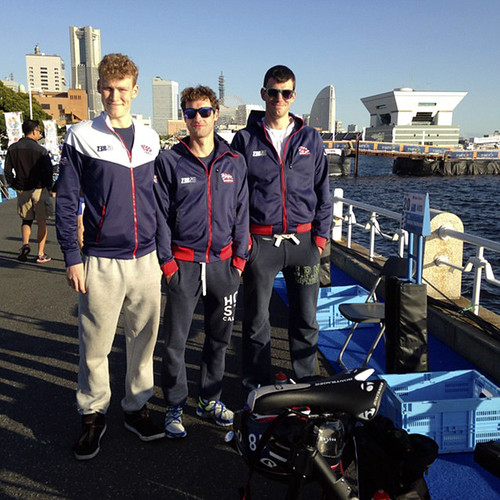 George, Dave Ellis and Jack after the race

Written by Andy Bryant on 31 May 2014. Posted in Race Reports 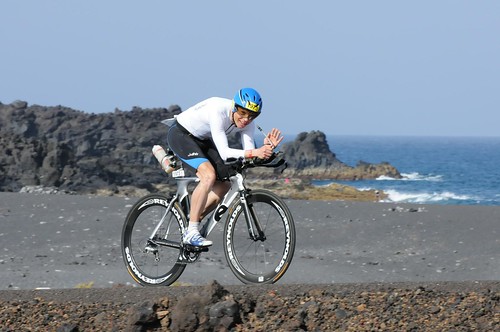 The wind, the heat; this race comes with an intimidating reputation, known by some as the toughest official ironman race.  But how hard can it be?  Last year I did the Forestman, with a hillier harder run, and have biked and run out in Lanza for a week every winter for the last few years.  I started a 5-month training build-up with specificity in mind and set out to give IM Lanza my best shot.

The journey began back in December, having rested for a few weeks after a long 2013 season of running and triathlon.  I started gradually, combining base-level training with a fundamental shift in diet: low-carb high-fat.  LCHF is something I’d wanted to try for a while – my partner Lucy started on this one year earlier than I – but there’s a significant adaptation period, hence waiting til the off-season to try it.  I’ll write more on this later, but I’ll say here it’s been a great success for me and I find it difficult to imagine going back to conventional ‘carbaholic’ lifestyle.  The benefits through training have been more sustained energy, enhanced recovery, tastier food and lowest-ever body fat (6-8%).

We use cookies to improve your experience on our site.
I accept